This past month our association participated in the annual Festival in the Park.  I signed up late as I had a prior commitment to host some close family friends who cancelled a few days before.  The late cancellation gave me an opportunity to fill in an early Saturday morning slot with Bob Fields.

Bob Fields and I had corresponded a bit before the show getting some of the logistics setup for the club.  He, Dan and the other club members did a great job getting everything setup and communicating the details of the venue at our last meeting. 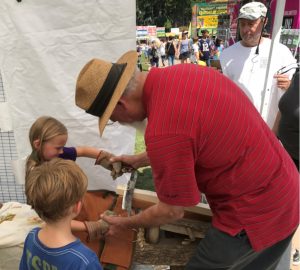 With the parking pass, I was able to park and ride the shuttle in.  Early in the morning when I arrived there was plenty of parking and the booths were just starting to open up.

When I got to the tent I learned there had been an accident nearby that cut power to half the park and we were in the half without electricity to run the fans.  Our booth was located near the first aid tent.  This made it easier to find, but I had to wonder if the organizers considered us a high risk.  I know I personally have had a few close calls with power tools and safety in the shop is always top of mind. 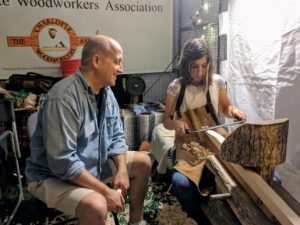 aracter, safety was top of mind at the event too.  Bob came prepared with gloves and a heavy apron that we dressed passersby’s in when they sat down to shape a wedge on the shaving horse.  The drawknives were just sharp enough to made shaving a joy.  Throughout the morning, we had as many women try their hand at the shaving horse as kids.  It made me wonder where Bob gets his charm. I probably should not wonder because he is a man of many talents.

Bob made his shaving horse over 20 years ago.  In perfect character for a well-made tool it performed as well at this event as it has at many other events and in the making of many of his shop projects.  There were lots of comments and questions about it as people stopped by to talk and try it out.

The table on display generated plenty of interest in the Learn and Build Class.  Plenty of people looked it over wondering if they could create a fine furniture piece.

As the morning turned into afternoon, Bob and I were looking for relief from the heat and opened the tent up to allow a little more of a breeze 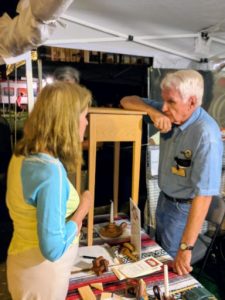 .  There had been a steady stream of people all morning.  So many people came by that we ran out of cards to hand out and had filled a page of email sign-ups from people interested in our club and in receiving the club newsletter. 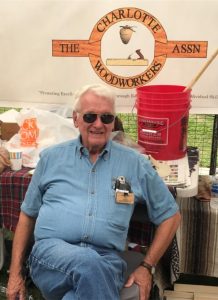 Chris Broughton who help the second day and said, “Day 2 of Festival in the Park went very well and there was non-stop interest in the in the group. The shaving horse was a huge hit with kids. I think it’ll be on a lot of Christmas lists this year.”

Speaking of Christmas, spending time in the booth gave us the perfect venue to promote One Special Christmas and we handed out a ton of their brochures and talked up the auction.

Overall, the Festival in the Park was a huge success and on behalf of the board and the rest of the club, hat’s off to all the volunteers and organizers who worked so hard to make it a success!